HOLLAND, Mich., May 15, 2017 (GLOBE NEWSWIRE) — Holland, the leader in Central and Southeastern next-day delivery, has been named 2016 LTL Partner of the Year by Ravago Americas, a leading global manufacturer and distributor of plastics, rubber and chemicals.

The selection process was based on key supply chain metrics including performance, communication and responsiveness in addition to overall superior support and customer service. Holland was chosen as the top regional carrier among the more than seventy carriers serving Ravago Americas for consistent, outstanding customer service as well as exceptional transportation service.

“I want to thank Echo Global Logistics for extending this honor to Holland and for our long-standing partnership,” said Holland President Scott Ware. “Customer satisfaction is only possible when each member of our team comes together to get the job done. The many hardworking men and women of Team Holland take great pride in delivering the utmost in service and quality. We are incredibly pleased to receive such generous recognition for those efforts.” 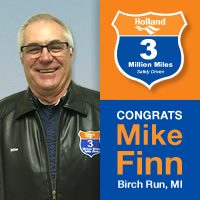 The 3-million-mile record is an exceedingly rare accomplishment that places Finn among a small, elite group of professional drivers. To help lend some perspective to this record, driving 3 million miles is equivalent to making 6 round trips to the moon, or circumnavigating the globe at the equator over 116 times. 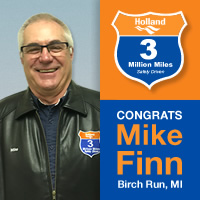 “We are extremely proud of Mike and this incredible achievement,” said Scott Ware, Holland President. “This record represents decades of constant vigilance and unwavering professionalism behind the wheel. That dedication makes our highways safer, and helps Holland deliver award-winning service to our customers. We would like to congratulate Mike on this accomplishment, and we thank him for his continued commitment to safety.”

Finn has been driving professionally for 36 years–the past 30 of which he’s spent with Holland. He operates as a linehaul driver out of the Holland Birch Run, MI service center, and makes the 450-mile roundtrip to South Bend, IN and back 5 days per week. His route takes him through one of the country’s most challenging snowbelts, making his record even more impressive.

HOLLAND, Mich., March 14, 2017 (GLOBE NEWSWIRE) — Truck drivers from across the United States will be traveling to the Holland service center in Atlanta, Ga., on Saturday, March 18, to not only show their commitment to highway safety and driving skills–but to raise awareness for the Pediatric Brain Tumor Foundation (PBTF) Georgia Chapter at the annual Safety Drive for a Cure.

“This event showcases how serious the trucking industry is about safety,” said Holland President Scott Ware. “It helps get more drivers involved in state truck driving competitions, gives veteran drivers a way to fine tune their safety skills, and aids the Pediatric Brain Tumor Foundation. Holland is honored to host the annual Safety Drive for a Cure.”

The event originally began in 1999 in North Carolina as an inner-company event between North Carolina and the border states as the “Battle of the Borders.” It was developed as a way for drivers to learn from the “best of the best” in the profession.

HOLLAND, Mich., March 10, 2017 (GLOBE NEWSWIRE) — Holland, a transportation industry leader in next-day delivery, has been named 2016 LTL Carrier of the Year by Vehicle Service Group (VSG) for the fourth consecutive year. The award recognizes performance across four critical competencies that include on-time pickup and delivery, administrative capabilities and safety.

The award is based on highest total quarterly scores related to:

“We are truly honored to receive this award from our partners at Vehicle Service Group,” said Holland President Scott Ware. “I couldn’t be more proud of our hardworking employees who have made this award possible, and for making Holland one of the best LTL carriers in the industry. I also want to thank VSG for this recognition and their continued partnership.”

“We are honored to receive this award from our valued partners at Unishippers,” said Holland President Scott Ware. “Our dedicated employees work extremely hard every day to deliver on our promise of providing quality, fast and reliable LTL next-day service. We take great pride in our industry-leading services and our commitment to achieving a level of customer satisfaction that is second to none.”

Unishippers, a leading provider of third-party logistics services to over 50,000 small and medium-sized businesses, presented the award to Holland at its annual convention on Jan. 12. Carrier Partner of the Year winners are selected based on service quality, performance, loss and damage events, customer service, claims resolution and overall commitment to the partnership.

To help lend some perspective to Greer’s accomplishment, driving 3 million miles is equivalent to making 6 round trips to the moon or circumnavigating the globe at the equator over 116 times. According to data from the U.S. Department of Transportation, it would take the average American driver over 220 years to log that many miles. In that time, the average driver would also be involved in over 13 accidents.

“Professional drivers face a lot of challenges on the open road,” said Scott Ware, Holland President. “Every mile requires an immense amount of skill, professionalism and dedication in order to remain safe. So, it would be impossible to overstate the significance of Wayne Greer’s accomplishment. Professionals like him not only help to make Holland great, they also help make our highways safer for everyone. We are extremely proud of Wayne’s achievement, and thankful for his continued commitment to safety.”

Greer has been driving professionally for 35 years and has spent the past 27 years with Holland. He currently operates as a linehaul driver out of the Holland Grand Rapids, MI service center. His 3-million-mile record represents only the miles he has accumulated during his time with Holland. However, Greer has maintained a safe driving record for the entirety of his 35-year career, amounting to over 3.5 million. In 2016, Greer was selected as a finalist for The Michigan Trucking Association’s Driver of the Year Award.

The recognition was given at the fifth annual Goodwill Awards recognizing “best in class” partners for their hiring and training of Goodwill program participants and commitment to the Goodwill mission.

On December 2-3, 2016 Team Holland came together with family and friends and the people of St. Louis to help deliver some much-needed holiday cheer to local children in need.

Over the course of two long days, more than 100,000 donated toys and new clothes worth more than $760,000 were unloaded, organized and distributed to local police and fire departments as well as organizations like the Urban League, Better Family Life, Moms on a Mission–in total some 40 different organizations. These first responders will distribute the gifts to those in their local communities to help build stronger bonds between first responders and the communities they serve.

The toy drive was spearheaded by Holland 2-million-miler, Roy Gillespie, and retired Holland professional driver Mike Koeller (a Minister at the Leap of Faith Church in Maryland Heights). Though the distribution event took a full two days, the duo actually started working on this drive last December!

[09.14.16] From Holland Headlines: Known for his deadpan sarcastic humor, comic Steven Wright once joked about the microwave fireplace he bought, saying “I can spend an evening in front of it in only eight minutes.”

The fact is that people today really are in a bigger hurry than ever. That’s especially true when it comes to shippers getting their freight to its destination. Driven in part by online retailers now providing faster deliveries–customers have come to expect quicker delivery times.

Holland can help you meet those expectations with our award-winning Guaranteed and Expedited services throughout our service area with deliveries of up to 750 miles. Choose one- or two-day service and take advantage of the largest number of next-day lanes from the Southeast, throughout the Midwest and into Canada.